SOK is NOT A "Mace" or Pepper Spray.

SOK (SOAK) is a water soluble lubric gel that, unlike pepper spray or OC, can be deployed in crowded or confined areas with no collateral or lasting effects.

SOK Home Defender 14 Ounce Can Can Deliver A Constant Stream For 16 Seconds For An Effective Range Of 20 Feet. 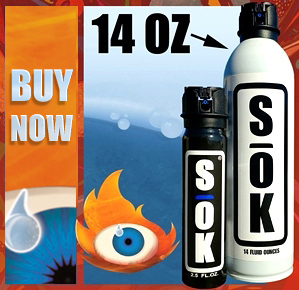 How Many Products In The SOK System?
Currently, there are two products: SOK and "SOK Defend".

SOK is available in 2.5oz and 14oz air powered (non-aerosol) cans that contain no flammable carriers or propellants, are capable of being sprayed at any angle and will not "explode" if punctured.

SOK Defend is a heavier, very "leggy goo" that is packaged in 1 gallon jugs for use in the HALT backpack system. Intended for riot control, this versatile formula can be provided with or without the eye stinging agent . Additionally, UV active tracers, or dyes as well as the SOK "Malodorant SV" can be added in the field.

The SOK 2.5oz system is affectionately called "Blue Line" as a heartfelt tribute to all who serve. It is in a 1.5" X 6.5" can making it convenient for pocket or purse carry as well as in the doors and cubbies of cars, trucks and semi's. Officers will find, it fits either the open top or the MK IV holster. Capable of two to three 2 second bursts at a distance of 6 to 10 feet, SOK Blue Line can be deployed for self-defense or subject compliance with an extremely low risk of collateral effects, contamination or inducing or aggravating medical conditions.

SOK is absolutely safe for indoor deployment or in confined areas like subways, buses or aircraft. SOK does not affect or impair the noses of K-9 officers or contaminate law enforcement vehicles and since it does not pose a flash risk, it can safely be deployed in tandem with tasers. Clean-up is fast and easy as SOK can readily be removed on scene with a cloth wipe and water rinse making it ideal for deployment in jail cells or holding facilities.

As originally conceived the 14oz SOK system provides a self defense or compliance option for people or personnel in and around building and facilities that do not allow pepper spray on premises because of the adverse consequences of any deployment. Justified or accidental.

If for any reason SOK is deployed, the consequences are minor and the clean-up is easy without the need for special training or very expensive professional decontamination services. With over 15 seconds of continuous spray, assailants or threats can be engaged at distances over 15 feet, possibly allowing time to run, hide and seek shelter.

Sprayed on hard surface floors, SOK can significantly impede traction and mobility allowing for even more time to seek help or safety. Administrators, SRO's and private security personnel can deploy SOK to break-up fights, and end threatening or other dangerous behavior. The 14oz SOK system is an ideal compliment to check point, metal detection and other high security areas as it can be deployed for subject compliance without any collateral or long lasting effects. The design for this 14oz, 2.5" X 9.75" can is intentionally utilitarian and plain so as to be inconspicuous as possible in school, church, hospital, institutional and business environs.

SOK Defend has absolutely no respiratory irritants and was developed at the behest of a federal agency who like many, were looking for a viable "humane" option to pepper, CS, and other tear gases or non-lethal projectiles. It is intended for riot control, crowd dispersal or other compliance scenarios and can be poured from jugs and buckets or sprayed via the 2 gallon, nitrogen powered HALT pack system. SOK Defend can be dispersed on concrete, asphalt or other outdoor surfaces to establish, "no-go" and skirmish line perimeters or lamp posts, signs and other street side objects to discourage climbing.

Though arson, molotov cocktails and various and sundry explosives have been declared "mythical" by some, SOK Defend has a generous dose of fire suppressant possibly giving officers the ability to keep small fires from becoming big ones or coming to the rescue of a flaming "peaceful protester". Easy to clean Defend can be hosed into storm drains or just let nature take its course.

Used with "Malodorant SV", Defend can be a long lasting, very stinky reminder that there will be consequences for lawless behavior.

A diabolical though harmless blend of FDA GRAS food flavors, yes flavors, that will make a skunk vomit! Mixed at a ratio of only 1 floz per gallon, SV coats and saturates all surfaces especially fabric, making that oh so chique riot attire quite vile and a great reason for Momma not letting their darling back in the basement. It can be very hard to get off of skin too, though the SOK SV Neutralizer comes real close.

Malodorant SV is available in 2 floz glass bottles, and though 1 ounce per gallon is recommended, a lot more or less can be added.

Working in concert with a federal agency, the HALT (Humane Air Launched Tactical) system was developed specifically to deploy SOK Defend. Equipped with a quick release harness, when the carbon fiber tanks are fully loaded with 2 gallons of Defend, the HALT system weighs less than 45 pounds. 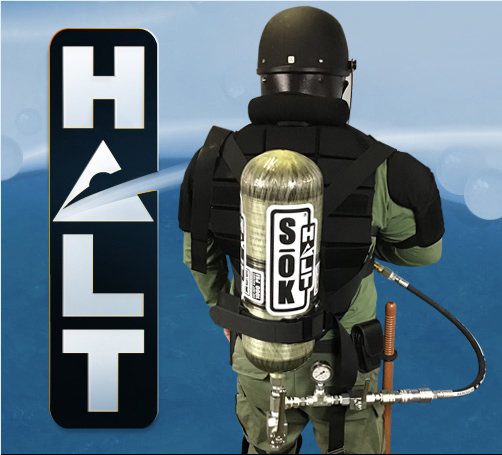 The HALT system is rated to 2500psi, with deployment distances of up to 60 feet with a two minute duration when system is charged to the recommended 1000psi. "Reload" times of 4-5 minutes are possible with easy to understand, "off the shelf" hydraulic and quick connect components that are readily replaced in the field if necessary.

The HALT system can also be used to spray SOK SV Neutralizer and comes complete in an aluminum carrying case.
Call SOK Today: (704) 400-9449